About The Williams Township Fire Company

The William’s Township Fire Company No. 1 was formed as a project of the William’s Township Civic Association.  The first meeting of the company was held on April 13, 1949 at the Fairview school.  The first officers were elected at this meeting.  Monthly meetings have been held ever since.  During the first few months, a Constitution and By-Laws were drawn up.  A Charter was issued by the Northampton County Courts.  A ladies auxiliary was formed.  Plans to raise funds were discussed, some set into action and most were very successful.  Plans for our first country fair were made on May 16, 1949.

On February 20, 1950 the committee set up to decide on a fire truck recommended a “Jeep” truck with a 300 gpm pump and a 350 gallon water tank trailer.  The recommendation was accepted and the “Jeep” purchased.  A fire squad was named at the next meeting.

In 1951 two new posts for Fire Police were created.  Also, a Fireman’s Relief Association was set up.

In 1952, at a meeting, a building fund was started when members present each donated $1.00. Fifteen acres of ground were purchased for $5,300, on which our present Station No. 1 now stands and where we hold our annual country fair.

In 1953, it was voted to build our Fire Station #1 (what is now the center section of the Fire Station.).

In these early years, the Fire Company did not have total community support or financial support from the township supervisors.  We struggled to raise funds to operate and purchase equipment.

On Feb.26, 1958 it was voted that “because of conditions in the Fire Company and the township, we should remove ourselves from active fire fighting and protection of the lives and property of the residents of the township”.

In March, 1958 at the next meeting, residents responded to the plight of the Fire Company.  Jay Wagner was named temporary fire chief and in February 1959, William R. Murray was elected fire chief.

December 17, 1958 for $1,800, we purchased a garage and land along route 611 in Raubsville.  This would become our station #2 and give us quick response to the south eastern part of the township and along route 611. 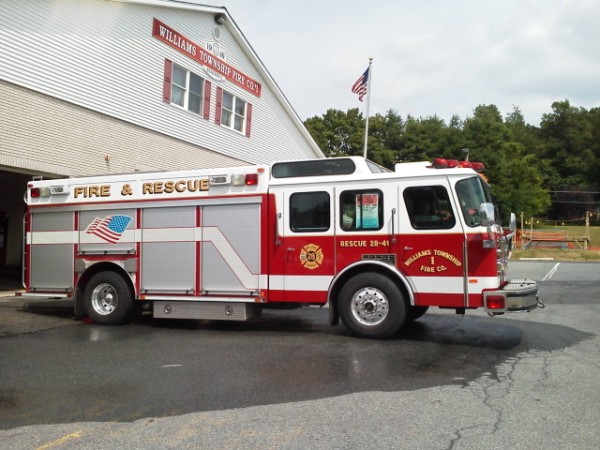